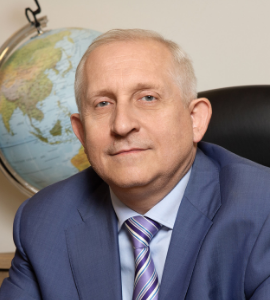 Alexander Cherednik graduated from the Pedagogical Institute in 1986. After graduation, he defended his dissertation on gifted children.From 1986-1993 he worked as a chemistry teacher at secondary school No. 25 (Vologda), and in 1992 he headed the Center for Work with Gifted Schoolchildren of the Vologda State Natural and Mathematical Lyceum. He is the author of the concept and founder of the Center, where he was rector for more than 10 years.He trained and educated more than 50 winners of All-Russian and international subject Olympiads. There are dozens of candidates and doctors of sciences among his graduates. Two students were awarded the Prize of the President of the Russian Federation in the field of science and innovation for young scientists.For over 15 years he has been developing and implementing charitable projects and programs in the field of education. He is the organizer of the All-Russian competition for teachers of mathematics and physics. In 2004-2006 he worked at the Dynasty Foundation. From 2007 to 2016, he was the executive director of the Fund for Support of Fundamental Physics.Since October 2016 Alexander Cherednik has served as Executive Director of the Andrey Melnichenko Foundation.