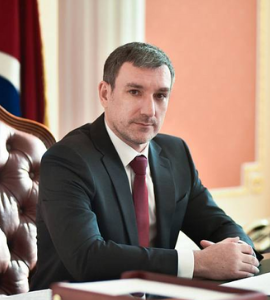 Governor of the Amur Oblast

Education: Blagoveshchensk State Pedagogical University, MGIMO-University. From 2002 to 2007, he held the post of general director of the regional state unitary enterprise "Amur-quality". In 2008-2010 - Deputy Mayor of Blagoveshchensk. In 2013-2015 - Deputy minister of economic development of the Amur oblast. In 2015 he took the position of representative of the SIBUR's general director in the region. Since September 2018 - Governor of the Amur oblast.