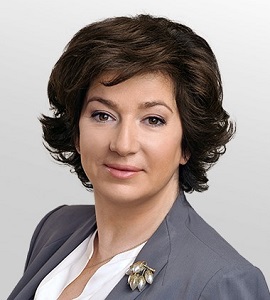 Graduate with honors from the faculty of technical cybernetics and automation of the Moscow Institute of chemical engineering. In 2006 received an MBA in Political and Business Communications from the HSE Institute of communication management.
From 1993 to 1995 – Manager, Deputy head of the advertising Department, Vico company.
From 1995 to 1997 – Chief Manager, Head of advertising Department, "Electronica-design" company.
From 1997 to 2005 – Public Relations Manager, Head of Group, Head of Department, Airport Management Company Limited.
In 2005 worked as Director of the Rublic Relations Department at Coalco in Switzerland and Russia.
He has been working in senior positions at METALLOINVEST since 2005. The current position has been held since September 2010.